In 1985, a group of Hungarian physics students decided to organize a meeting with their peers from all over the world. After a great deal of work, student physicists came together for their first conference, dubbed the International Conference for Students of Physics (ICSP), in Budapest, Hungary in the summer of 1986.

The great success of the first conference led to another being held the next year in Debrecen, Hungary. During this conference, participants expressed their desire to form an international body to encourage peaceful cooperation and mutual understanding between physics students. The International Association of Physics Students (IAPS) was born on 12th September 1987 when the first Charter was signed. This established IAPS as a multinational, non-profit, non-governmental organisation run entirely by students from across the globe.

The structure of IAPS was set up by the founding members at the first meeting in Debrecen to consist of an overseeing governing body known as the General Meeting (General Assembly), which is comprised of elected officers from the National and Local committee members. A permanent office is maintained in Mulhouse, France with the European Physical Society.The Central Office was abolished in the Annual General Meeting in London in 2007 as the renewed Charter was ratified. The goal of this renovation was to improve continuity in IAPS and assure that the EC consists of qualified people. The Central Office was a central governing body elected by the General Meeting, consisting of the President, the Secretary and the Treasurer. The Central Office was elected and based in a different country each year.

To ensure that future IAPS members would be able to learn about cutting-edge developments in physics and in other scientific fields, interact with professional physicists to learn about careers and opportunities in physics and to enjoy the benefits of interacting with their peers from other cultures, the founders of IAPS also agreed that the International Conference for Physics Students (ICPS) should occur annually. Hence since then, the ICPS has been organised in a different country every year, creating an annual forum of about 350 physics students.

As the years passed IAPS has seen many developments and achievements. In 1993 the first conference outside Europe was organised in Bodrum, Turkey (Asia). In 1996, the Journal of International Association of Physics Students (jIAPS) became a formal printed publication of the organisation. The first non-European central office was established in the United States of America during the 2001/2002 fiscal year. In 2002, IAPS expanded its activities to include a summer school with the first held in Coimbra, Portugal with a Computational Physics theme. Also in 2002, ICPS was organized for the very first time as a joint conference with the European Physical Society in Budapest, Hungary.

Through its existence, IAPS has been accumulating a number of affiliations with several international organisations. These include, for example, the European Physical Society (EPS), Institute of Physics (IOP) and the International Union of Physics and Applied Physics (IUPAP). IAPS is still pursuing collaborative partnership efforts with other organisations and the General Meeting welcomes all organisations that are willing to affiliate with us to have a positive impact in the global scientific community.

IAPS is run by students from all over the world. Apart from the elected officers, IAPS welcomes all students and other people who are willing to volunteer their time, to champion the course of IAPS in becoming a concrete and formidable organisation that will address the concerns and needs of young physicists across the world. Our major annual event, the International Conference for Physics Students (ICPS), is organised each year in a different member country. It allows physics students to present their work to an international audience and establish contacts among their peers from around the world. IAPS also started organising yearly since 2014 its own Physics Competition, the Physics League Across Numerous Countries for Kickass Students (PLANCKS). Organised every year in a different country, it gathers at least 30 teams from several different countries devoted to show their skills in physics and to defend their country.

More information about the history of IAPS can be found in the article Made in Hungary – The Story of the International Association of Physics Students, which has been written by  Jim Grozier for the 25th birthday of IAPS in 2011. 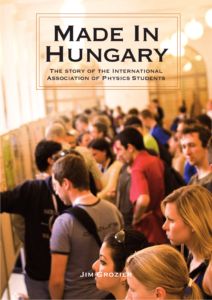